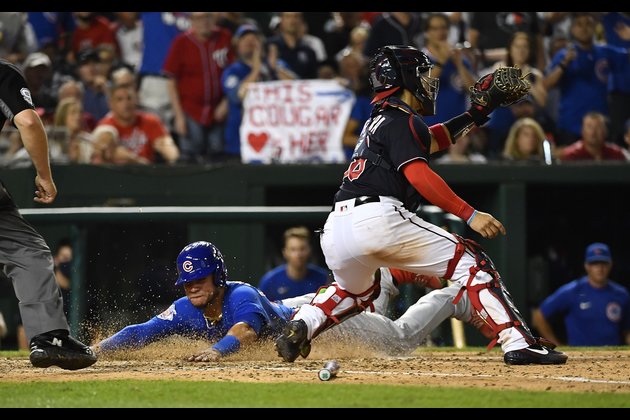 The Chicago Cubs and the Washington Nationals, two of baseball's biggest sellers at the trade deadline, will continue their new path forward when they play the second of their three-game series on Saturday.

The Nationals, World Series champions in 2019, dealt eight veterans Thursday and Friday including ace Max Scherzer, All-Star shortstop Trea Turner and Daniel Hudson -- who recorded the final out of the World Series -- as they committed to their first rebuild in more than a decade.

"These aren't just assets that you acquire. These are human beings that I have great affinity for," Nationals general manager Mike Rizzo said Friday. "It's been a tough couple of days. And yesterday was probably as tough a day as I've had as a general manager."

In the visitor's clubhouse, the 2016 World Series winners were breaking up their core unit as well, saying goodbye to a group that included first baseman Anthony Rizzo, third baseman Kris Bryant and shortstop Javy Baez.

"Emotional is the first word that comes to mind," Cubs manager David Ross said. "Sad, difficult, a lot of negative words that I usually don't like to use on these Zooms. ... [Rizzo, Baez and Bryant] changed expectations about this organization. They changed the caliber of play expected."

One veteran still remaining for Chicago is right-hander Kyle Hendricks (12-4, 3.85 ERA), who will start on Saturday.

Hendricks hasn't lost since May, winning 10 straight decisions while giving up three earned runs or fewer in 12 of his last 14 starts. Last time out he settled for a no-decision against the Cincinnati Reds, giving up five runs on nine hits over 4 1/3 innings.

"Luckily we've put in the work, and I've been able to find a good groove now, but it never stops," Hendricks said. "I'm still continually trying to get better and trying to stay in this groove and keep executing pitches."

Hendricks, who has a chance to become the Cubs' first 20-game winner since Jake Arrieta in 2015, is 3-2 with a 3.06 ERA in eight career starts against the Nationals.

The Nationals' starting pitcher for Saturday is still to be announced.

Josh Bell and Luis Garcia homered and the Nationals defeated the Cubs 4-3 on Friday night.

Garcia, 21, will see a lot of time at second base with the departure of Josh Harrison. Twenty-three-year-old Carter Kieboom, who will also now break into the lineup, had two hits and a walk.

"It means a lot to all of us," Garcia said through an interpreter regarding the opportunity young players are getting. "To stay positive, to do everything we can to help the team win, to show what we can do and continue the path that has been laid before us."

Sergio Alcantara and Rafael Ortega had two hits each for the Cubs, who have lost four straight.

Among the new faces in the Chicago lineup were Patrick Wisdom at first base, Matt Duffy at third base and Alcantara at shortstop.

Arrieta took the start following the trade of Trevor Williams.

"We have a responsibility to show up and perform every day still with the intent to win every single game," Arrieta said. "We play to show these new guys how it's done, how to operate, how to build a winning culture. It's time for the next wave of guys to establish that."