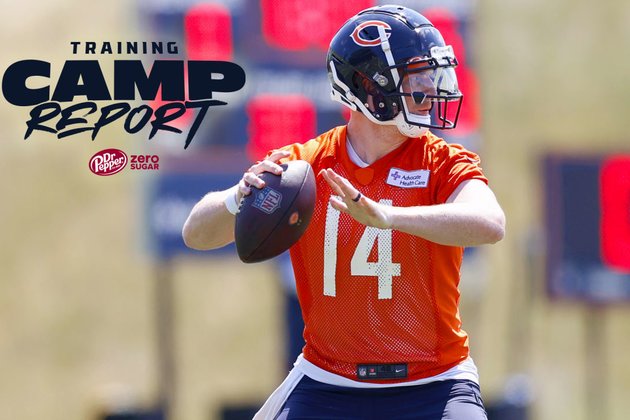 As the Bears prepare to conduct their first training camp practice Wednesday, they obviously have yet to develop an offensive identity. But even at this early stage, starting quarterback Andy Dalton is confident that the unit will excel in multiple areas this season.

"I feel like with this offense and the players that we have, I think we can be pretty versatile," said Dalton, an 11-year NFL veteran who signed with the Bears in March. "We can do a lot of different things. We can run the ball [in] tight formations, we can spread you out and throw the ball.

"We don't have to have one identity: 'This is exactly what we are.' We want to be multiple and be able to do different things. I think we'll really figure out who we are once the season gets going and once we get through camp. I'm excited about what we've got going."

Selected by Cincinnati in the second round of the 2011 draft out of TCU, Dalton was voted to the Pro Bowl in three of his first six seasons and helped lead the Bengals to the playoffs in each of his first five years in the league.

"This was a great opportunity for me to come here," Dalton said. "The relationship that I had with Bill Lazor coming in was an easy connection from the start, and then getting to be around this organization and know that there's high expectations here.

"This team has been close the last several years. We've got a good group. I think that's the thing that I was able to hear from afar just going through the whole free agency process. And now getting to be a part of it and getting to see all the guys that we have and some of the new guys that we've brought in, I'm excited about this team and what we're going to be able to do."

After being entrenched as the Bengals' starter for a decade, Dalton has now joined a new team for the second straight season. He spent last spring and summer learning a new offense with the Cowboys, an experience he has drawn upon this year with the Bears.

"When you get into it, you want it to become second nature," Dalton said. "Every offense you go in, it just takes a little time. It's one thing to read a play, to see it on the piece of paper. It's another thing to get the play call, call it, be in the huddle, directing guys, making sure everybody's on the same page with what you're doing.

"That was a big part of the spring was just the communication from getting the play call to communicating at the line, making sure everybody was on the same page in the way we're doing things. [I was] thankful for that time to really kind of get into it and be in the offense."

Dalton gained a firm grasp of the playbook during the offseason, something that was evident during OTA and minicamp practices.

"The No. 1 thing that I see is the anticipatory throws," said coach Matt Nagy. "Andy has all the leadership stuff. He has the stuff that you look for where you break a huddle, it's a little sloppy, it doesn't go right. He gets it right back and says, 'No, no, no, do it again, let's go. You do this, you do that, let's roll.' He has that; that's easy.

"The football part that I see is his timing pre-snap of when he calls what motion, shifts, adjustments, stuff like that. But when the play's going, anticipatory throws, man. Those wideouts know that ball is coming regardless of the coverage. He knows where to go, and you better get your head around."

As training camp commences, Dalton understands why there's so much hoopla surrounding rookie quarterback Justin Fields. The Bears traded up nine spots in the draft to land the Ohio State star, but they plan to groom Fields as the backup this season behind Dalton.

"So that's my focus. I'm not worried about all the stuff that's going to be going on with Justin because that doesn't affect me. At the end of the day, it's what I'm going to be doing. Justin and I have a really good relationship, and I'm trying to help him out as much as I can."