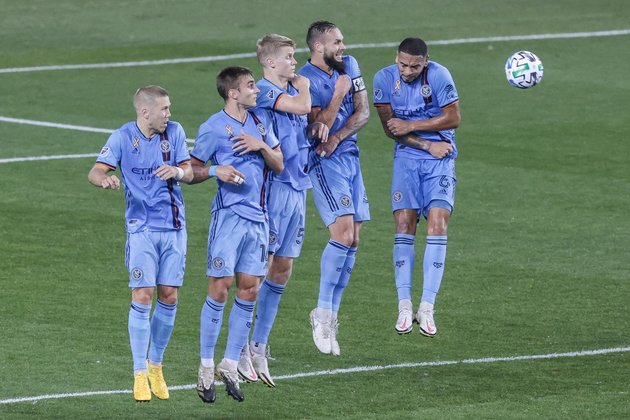 The Columbus Crew look to end a four-game winless streak when they host New York City FC at Mapfre Stadium on Sunday in Columbus, Ohio.

After being nearly unbeatable through the first 13 matches and on pace for allowing the fewest goals in an MLS season, the Crew (9-4-4, 31 points) have fallen on hard times and given New York City (8-7-3, 27 points) hope of closing the gap between the teams in the playoff race.

Columbus is third in the Eastern Conference after losses to ninth-place Montreal and 13th-place FC Cincinnati.

"The season's not lost," Crew coach Caleb Porter said. "I'm very disappointed the results have not gone in recent games the way we've wanted them too."

New York City is more upbeat after a 1-1 draw at Orlando City on Wednesday as Keaton Parks got the equalizer in the 43rd minute. NYCFC are sixth in the East.

The result came hours after James Sands was ruled out for the remainder of the regular season with a right foot fracture, adding to the injury woes.

"The last 10 games (Parks) been one of the best players on the team," Deila said.

The Crew are 0-3-1 in the past four games and it's not hard to see that the confidence is waning, especially on defense. They have conceded nine goals in the past four matches after giving up five in the first 13 when they had a 9-1-3 mark to lead MLS in points.

"There's times in the season where your team is tested, the mettle of your team is tested," Crew defender Josh Williams said. "I think this is one of those times. We've just got to get back to believing in ourselves, believing that every time we step on the field that we truly, truly are the superior team."

WASHINGTON, DC - With just a few days until voters cast the last ballots in the U.S. presidential election, the ...

SAINT-LOUIS, Senegal - In what has been described as the deadliest shipwreck recorded so far this year, at least 140 ...

NICE, France - A man wielding a knife on Thursday killed three people in an attack at the Basilica of ...

Golfing great comes out in support of Trump re-election

Snowden, hero to many, traitor to others, is awarded Russian residency

Chinese stocks gain for third day in row, most other Asian markets dip

SYDNEY, NSW, Australia - Asian investors on Thursday ignored the ructions overnight on Wall Street and around the globe, keeping ...

SYDNEY, NSW, Australia - Asian stocks finally caught up with their global counterparts on Friday, with major indices in all ...

WASHINGTON, DC - There will be no new coronavirus economic relief package in the U.S. before next Tuesday's presidential and ...

OTTAWA, Canada - Five major aerospace companies in Canada and Boeing have inked an agreement which will see a multi-decade, ...