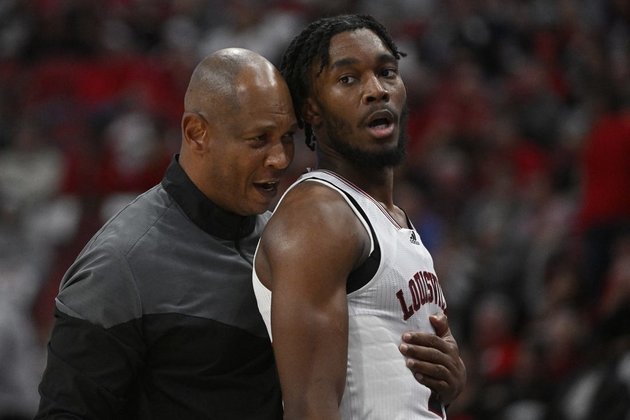 The Cincinnati Bearcats and the winless Louisville Cardinals will look to leave the Maui Invitational on a positive note when they meet in the seventh-place game on Wednesday in Lahaina, Hawaii.

Louisville, which is off to its worst start since opening the 1940-41 season 0-11, has had an even rougher time.

Against the Red Raiders, El Ellis and Jae'Lyn Withers each had seven points, but the Cardinals shot 22.4 percent from the field and committed 18 turnovers that Texas Tech converted into 18 points.

"(Arkansas and Texas Tech) imposed their will on us consistently throughout the whole game and we turned the ball over and we shot a bad percentage because of them," Louisville first-year coach Kenny Payne said.

"I'm evaluating and I'm learning who I can trust and who I can't trust. I need a group of guys that will fight."

The Buckeyes outscored Cincinnati 43-26 in the second and converted the Bearcats' 14 turnovers into 24 points.

Viktor Lakhin, with 12 points on 6-of-7 shooting, was the lone Bearcat to score in double figures.

"They kicked our tails in the second half, so we're disappointed," Cincinnati coach Wes Miller said. "We're frustrated. But give Ohio State credit. They were the more physical team tonight on both sides of the ball. They took it to us there, especially in the second half."

WASHINGTON, D.C.: Finland and Sweden are prepared to join the NATO alliance, the U.S. State Department announced this week.The move ...

US files antitrust case against Google over digital advertising

WASHINGTON D.C.: The US Justice Department has filed an antitrust complaint claiming that Google is abusing its dominance in digital ...

Public health experts have welcomed Mexico's ban on cigarette smoking in all public places, including hotels and beaches, after the ...

France military ordered out of Burkina Faso in west Africa

OUAGADOUGOU, Burkina Faso: As Burkina Faso, in western Africa, faces an Islamist insurgency, it is set to end a military ...

As births continue to fall, Japan seeks incentives for parents

TOKYO, Japan: Japanese Prime minister Fumio Kishida said this week that it was "now or never" for Japan, one of ...

BENTONVILLE, Arkansas: To attract and retain employees in a tight domestic labor market, Walmart has announced that it it will ...

Artificial meat given first approval by US officials

NEW YORK CITY, New York: As early as this year, lab-grown meat could be served in some restaurants in the ...

As travel opens up, Thailand prepares for 5 million Chinese tourists

BANGKOK, Thailand: Following China's reopening and the end of its strict COVID-19 restrictions, businesses on Thailand's holiday island of Phuket ...