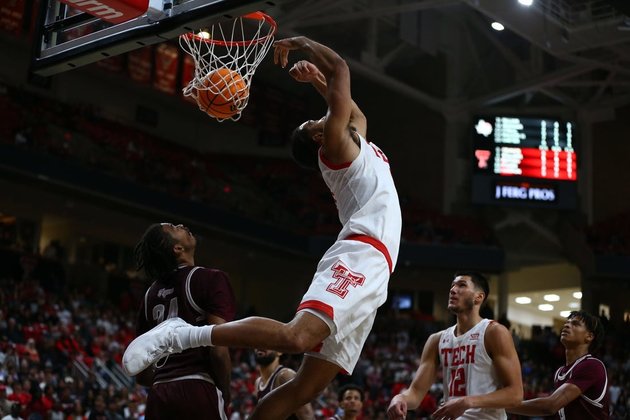 Ohio State coach Chris Holtmann had a closeup view of Texas Tech and was impressed with how the Red Raiders shut down Louisville.

The Buckeyes (4-1) were awaiting their game against Cincinnati at the Maui Invitational in Lahaina, Hawaii, on Tuesday but couldn't take the floor until No. 21 Texas Tech (4-1) finished off a dominating 70-38 victory, limiting the Cardinals to their lowest scoring output since March 7, 1981.

The Buckeyes then went out and defeated Cincinnati 81-53 to set up the fifth-place game against the Red Raiders on Wednesday.

"We're going to see a defense unlike anything we've ever seen, we've ever played," Holtmann said on the Ohio State postgame radio broadcast. "In my six years here, we haven't played a defense like this in terms of their ability to be on one side of the ball rotation, collapsing on the ball.

"It is a leap in every way. We're going to have to deal with some frustration in some difficult places and some tough moments in the game."

"That's just a testimony to our defense," Texas Tech forward Kevin Obanor said. "I'm just proud of the guys, and we got to look forward to the one that we got (Wednesday)."

Louisville trailed 15-11 before the Red Raiders clamped down and went on a 17-2 run to close the first half with a 32-13 lead. Texas Tech then scored the first 13 points of the second half to put the game away quickly.

Holtmann believes an 88-77 loss to a physical No. 17 San Diego State team on Monday to open the tournament, plus the matchup against Texas Tech, will harden his squad for the rigors of the Big Ten.

"We're going to have three games here and I think at the end of the year we'll look back and we will have played two of the top 10 defenses in the country," Holtmann said.

The Buckeyes are led by Zed Key, who had 19 points and eight rebounds vs. Cincinnati to barely miss his fourth double-double of the young season. A pair of freshmen, Brice Sensabaugh and Bruce Thornton, each had 17 points.

Thornton will be tasked with running the offense against the Red Raiders.

"Bruce has been really, really solid in a lot of ways," Holtmann said. "He's really sure with the ball ... He's just a mature kid. There's no question we've had to go through some struggles, but he's been really good these two days. He's got a poise about him."

WASHINGTON, D.C.: Finland and Sweden are prepared to join the NATO alliance, the U.S. State Department announced this week.The move ...

US files antitrust case against Google over digital advertising

WASHINGTON D.C.: The US Justice Department has filed an antitrust complaint claiming that Google is abusing its dominance in digital ...

Public health experts have welcomed Mexico's ban on cigarette smoking in all public places, including hotels and beaches, after the ...

France military ordered out of Burkina Faso in west Africa

OUAGADOUGOU, Burkina Faso: As Burkina Faso, in western Africa, faces an Islamist insurgency, it is set to end a military ...

As births continue to fall, Japan seeks incentives for parents

TOKYO, Japan: Japanese Prime minister Fumio Kishida said this week that it was "now or never" for Japan, one of ...

BENTONVILLE, Arkansas: To attract and retain employees in a tight domestic labor market, Walmart has announced that it it will ...

Artificial meat given first approval by US officials

NEW YORK CITY, New York: As early as this year, lab-grown meat could be served in some restaurants in the ...

As travel opens up, Thailand prepares for 5 million Chinese tourists

BANGKOK, Thailand: Following China's reopening and the end of its strict COVID-19 restrictions, businesses on Thailand's holiday island of Phuket ...