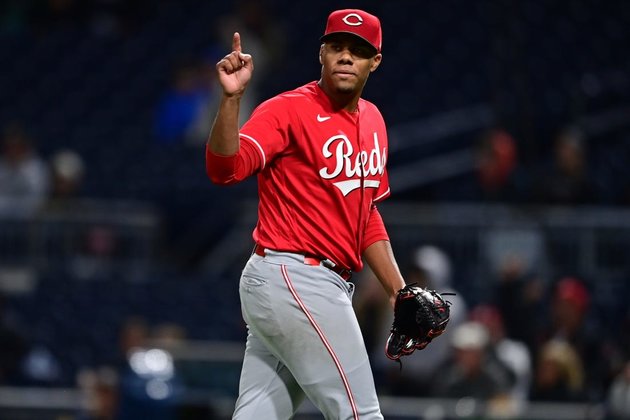 It hasn't been a pretty ending to what could be just the second 100-loss season in franchise history for the Cincinnati Reds.

The Reds (60-99), who host the Chicago Cubs in a three-game, season-ending series beginning Monday night, have lost six straight contests and are only 4-19 over their last23 games. They have scored just 18 runs in their last 10 games.

But one bright spot has the been the performance of Monday night's starter, right-hander Hunter Greene.

The 6-foot-5, 230-pound Greene, who was the No. 2 overall pick of the 2017 MLB Draft, carries just a 4-13 record and 4.66 ERA into the 24th start of his rookie season. But his statistics in his three starts since returning from a six-week stint on the injured list with a right shoulder strain have been very promising.

Greene has allowed just 10 hits and six walks in 17 innings since his return, with an eye-popping 29 strikeouts and a 1.06 ERA. His 11.73 strikeouts per nine innings this season is the highest by a Reds starting pitcher (minimum 15 starts) in franchise history.

"(He's) still kind of fresh off the injury, but really another step in the right direction to finishing off the season strong," Cincinnati manager David Bell said after Greene allowed one unearned run on four hits over six innings while striking out 10 in his last start, a no-decision against the Pittsburgh Pirates on Tuesday.

"I worked my butt off when I was (rehabbing), making sure that I wasn't just healthy coming back, but I was going to be a new pitcher," Greene said.

Monday's start will be the final one of his rookie campaign. Cincinnati needs to sweep Chicago to avoid joining the 1982 Reds (61-101) in the 100-loss club.

It won't be easy. The Cubs bring in a season-best seven-game win streak and have won 11 of their last 12 games.

Wesneski, obtained from the New York Yankees at the trade deadline for reliever Scott Effross, will be making just his fourth career start and sixth major league appearance.

He has won his last two starts and was sparkling in relief in his major league debut on Sept. 6 against Cincinnati, allowing two hits and a walk over five shutout innings while striking out eight. That made him the first reliever since at least 1901 to log at least five scoreless innings while allowing two or fewer hits with a minimum of eight strikeouts in his major league debut.

The Cubs come in off a three-game sweep of Cincinnati at home, outscoring the Reds 16-3 in the process.

Chicago manager David Ross said he has been happy with his team's effort down the stretch even though they enter Monday 19 games behind National League Central winner St. Louis. The Cubs are 15-4 over their last 19 games, the best record in the National League during that span.

"I think the thing that I've said over and over again about this group is that they've fought even in the beginning of the year," Ross said. "There are a lot of fighters and guys who didn't give up. I think a lot of work has been put in and the focus and attention to detail is paying off.

"Nobody is going through the motions here and I think that's a credit to them and how they come prepared to come to work every single day."