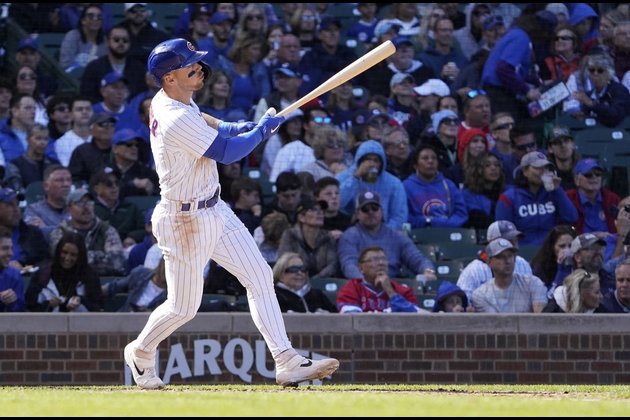 Nelson Velazquez had a two-run double to highlight a five-run first inning and later added a two-run triple to lead the host Chicago Cubs to their seventh straight victory, 8-1, over the Cincinnati Reds on Sunday afternoon.

It was the fourth consecutive quality start for Stroman (6-7) who walked two and struck out seven, one shy of his season high. The seven-game win streak is the longest of the season for Chicago.

Ian Happ had three hits and an RBI, Seiya Suzuki went 2-for-4 with two runs scored, Nico Hoerner had two RBIs and two runs scored and Franmil Reyes had a double and two hits for Chicago (73-86). The Cubs, who won for the 11th time in their last 12 games, closed out their home schedule with a 47-44 record.

Jonathan India went 2-for-3 with an RBI and Chuckie Robinson had a double for Cincinnati (60-99) which lost its sixth straight game and for the 19th time in the last 23 games. The Reds will need to sweep a season-ending home series with the Chicago starting Monday to avoid losing 100 games in a season for the second time in franchise history.

Chicago, taking advantage of Anderson's wildness, jumped out to a 5-0 lead in the first inning. Zach McKinstry led off with a double, Willson Contreras was hit by a pitch and Anderson then walked Suzuki and Happ to force in a run. Hoerner made it 2-0 with a fielder's choice and Reyes followed with an RBI single.

Fernando Cruz replaced Anderson after he walked P.J. Higgins to load the bases again and struck out David Bote, but Velazquez followed with a two-run double into the left field corner.

Hoerner made it 6-0 in the fourth with a sacrifice fly, driving in Suzuki who had singled and advanced to third on a double by Happ.

Cincinnati cut it to 6-1 in the seventh with a run off reliever Mark Leiter Jr. Mike Siani led off with a single, advanced to second on a groundout and scored on India's bloop single to right.

Velazquez made it 8-1 in the bottom of the seventh with a two-run triple off the top of the wall in right.