Cards' Adam Wainwright aims to get back on track vs. Pirates 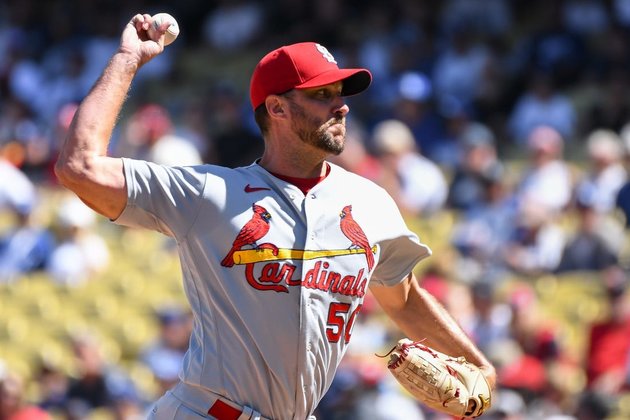 Adam Wainwright will try to reverse his late-season fade Sunday when the St. Louis Cardinals attempt to complete a three-game sweep of the visiting Pittsburgh Pirates.

"This team needsme to pitch well if we're going to win the World Series; I really need to be a part of it," Wainwright said. "I'm frustrated. The stuff is not great."

Wainwright (11-11, 3.51 ERA) has allowed four runs in four of his five starts this month. In his most recent outing, a 4-1 loss to the Los Angeles Dodgers last Sunday, he lasted just three innings and yielded four runs on six hits and three walks.

Wainwright opted not to skip a start to refresh his arm, but he got extra days of rest ahead of this Sunday's game.

Cardinals manager Oliver Marmol believes Wainwright will get back on track and earn his spot in the postseason rotation.

"There are a couple of things that we've identified that he wants to work on that will get him in a better position to get some of the velo back," Marmol said. "Just mechanically speaking. So he'll do that over the next several days and then take another shot at it. Everyone is fairly optimistic."

This will be the last regular-season game for the Cardinals' Albert Pujols and Yadier Molina at home, and the team will honor them in pregame ceremonies.

Pujols and Molina have said this will be their final season. Pujols is going out with a flourish that included his 701st career homer Friday and a two-run single on Saturday.

"I think we're seeing one of the best hitters of our generation," Pirates manager Derek Shelton said. "He's had an unbelievable second half. You cannot make mistakes to him right now. ... What he's done over the course of his career, and especially what he's done over this second half, is extremely special."

He received a no-decision in his last start Monday, allowing two runs on two hits in four innings against the Cincinnati Reds.

Contreras is 1-0 with a 4.76 ERA in three appearances against the Cardinals this season, including two starts. Corey Dickerson (2-for-4, double, two RBIs), Paul Goldschmidt (2-for-5, two doubles), Nolan Arenado (2-for-6) and Tommy Edman (2-for-6) have had some success against him.

Pujols has not faced Contreras.

The Pirates adjusted their bullpen midway through the series, promoting former Cardinals reliever Junior Fernandez from Triple-A Indianapolis. He replaced Wil Crowe, who will finish the season on the injured list due to elbow inflammation.