No. 3 Ohio State strikes early, easily hangs on vs. Wisconsin 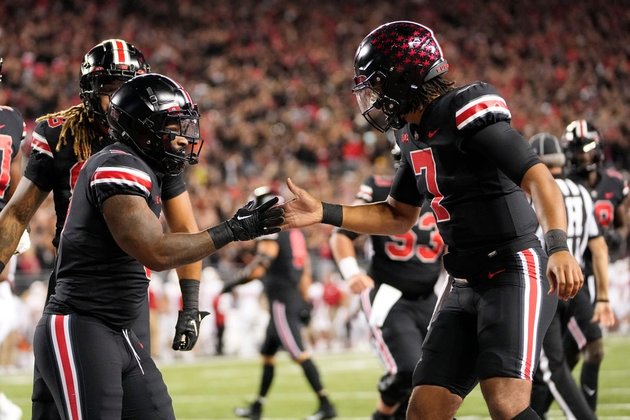 C.J. Stroud threw for five touchdowns as No. 3 Ohio State scored early and often to defeat Wisconsin 52-21 in the Big Ten opener for both teams in Columbus, Ohio.

Stroud was 17-for-27 for 281 yards and an interception with Emeka Egbuka making six catches for 118 yards and two touchdowns. Cade Stover added four receptions for 51 yards and two TDs as well.

The Buckeyes, who scored 11 touchdowns on their first 12 possessions the previous game against Toledo, had four TDs and a field goal the first five times they had the ball to take a 31-7 halftime lead.

After Williams' score made it 7-0, Tanner McAlister intercepted Graham Mertz at the Wisconsin 46 and had a return of 30 yards to set up the 14-0 lead. On the next series, Stroud found Stover open in the right corner.

The Buckeyes extended the lead to 28-0 at the 13:33 mark of the second quarter with Williams taking it in from the 3.

He ran for 101 yards and TreVeyon Henderson had 121 for the Buckeyes.

Wisconsin (2-2, 0-1) got on the board near the midway point of the second on a 1-yard plunge by Mertz at the end of 10-play drive for a 28-7 score. Later, Stroud threw a 12-yard TD to Julian Fleming early in the third quarter to make it 38-7 and his 8-yarder to Egbuka extended the margin to 45-7 late in the third quarter.

Mertz passed for 94 yards with a TD and an interception, completing 11 of 20 passes, while Braelon Allen ran for 165 yards, including one 75-yard touchdown carry to make it 52-21 halfway through the fourth quarter.

The Badgers have lost nine straight in the series and their last win in Columbus was a 24-13 victory in 2004.