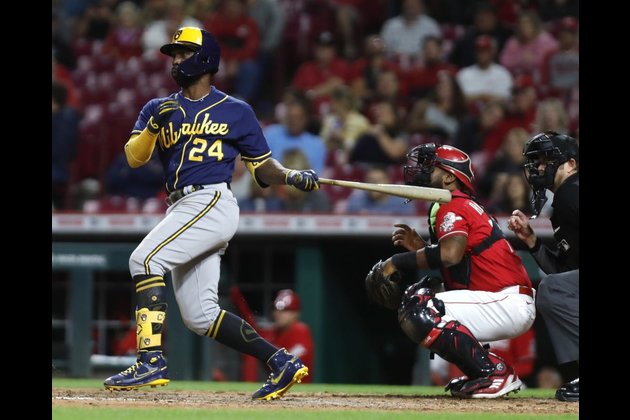 Last time the Milwaukee Brewers missed the playoffs, Ryan Braun was their starting left fielder, Brandon Woodruff was a rookie and Eric Thames and Travis Shaw led the team with 31 homers apiece.

Flash forward five years later, and the Brewers are once again at risk of having their season end in early October.

Milwaukee will look to keep its playoff hopes alive when it visits the Cincinnati Reds on Saturday in the penultimate contest of a four-game series.

The Brewers (81-70) find themselves on the outside of a tightly contested National League wild-card race. Milwaukee sits 2 1/2 games behind the Philadelphia Phillies (83-67), who hold the second NL wild-card spot, and two games back of the San Diego Padres (83-68), who sit in the third and final wild-card position.

However, Milwaukee could be peaking at the right time. The Brewers have won eight of their past 12 games after taking down the Reds 5-3 on Friday night. The Milwaukee bullpen was dominant, as four relievers combined to yield just one unearned run on two hits through 6 1/3 innings.

"They do an amazing job. They did an amazing job (Friday)," Brewers designated hitter Andrew McCutchen said. "That's what makes them special. So, they knew what they needed to do, they knew the job that they were going to have going into (Friday)."

Right-hander Corbin Burnes (10-8, 3.12 ERA) will look to help the Brewers maintain their momentum on Saturday.

Burnes is 1-1 with a 2.48 ERA against Cincinnati in 13 career appearances (three starts). In his lone outing against the Reds this year, he allowed one run on two hits through six innings while walking two and striking out nine in a no-decision on Aug. 7.

In his most recent major league outing, Ashcraft went 6 2/3 innings on Aug. 19, allowing three runs on nine hits against the Pittsburgh Pirates. He walked one and fanned eight.

Ashcraft is 0-1 with a 5.91 ERA against Milwaukee in two starts this year, his first major league campaign.

"I just got to keep pounding the strike zone and getting ground balls like I've been doing," Ashcraft told the Cincinnati Enquirer. "That'd be the biggest thing to end the year strong and go into next year in a positive way."

The odds aren't in Ashcraft's favor, though, as the Reds (59-92) have dropped their past four meetings with the Brewers. Cincinnati is just 5-12 against Milwaukee this season.

Offense has been especially hard to come by as of late for Cincinnati, which has scored no more than three runs in 10 of its past 13 games.

However, one of the team's newest additions hopes to change that.

Outfielder Mike Siani was selected from Triple-A Louisville on Wednesday as a replacement for Nick Senzel, who will miss the rest of the season with a toe injury. Siani went 0-for-3 in his major league debut on Thursday, but he provided some pop in the minors, hitting 14 homers during his time with Double-A Chattanooga and Louisville.