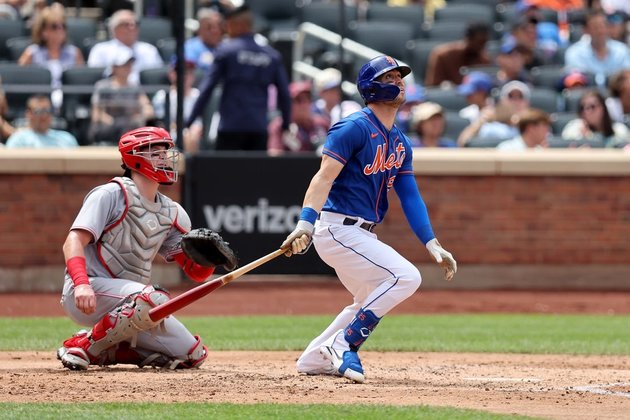 Tyler Naquin homered for the Mets, Pete Alonso had three hits and an RBI, and Jeff McNeil drove in two runs. The Mets scored in five of the first six innings as they won their sixth straight game and 15th of their past 17.

The Mets feasted on Cincinnati starter T.J. Zeuch (0-1), who was making his first appearance for the Reds after two starters were traded and Hunter Greene went on the injured list with a strained shoulder.

Joey Votto reached base three times, including two hits, and drove in a run for the Reds. Kyle Farmer also had two hits. Vogelbach, Naquin and Luis Guillorme had two each for the Mets.

The Mets jumped on Zeuch at the outset, getting a hit batter and a walk to start the first and cashing in on Alonso's single and McNeil's sacrifice fly.

New York began to pull away in a three-run second inning, getting a two-run single from Lindor and an RBI single by Vogelbach, who has driven in 10 runs in his past seven games.

In the third, Naquin, whom the Reds dealt to the Mets at the trade deadline, hit his 10th homer of the season and third with New York, to make it 6-0.

The Reds countered with Votto's RBI double and Jake Fraley's sacrifice fly to cut their deficit to 6-2 in the fourth, but they couldn't capitalize in the fifth after loading the bases with two out against Walker.

The Mets added an unearned run in the bottom of the fifth, then padded their cushion in a three-run sixth, highlighted by Vogelbach's two-run double and McNeil's double. The hit extended McNeil's hitting streak to 13 games.