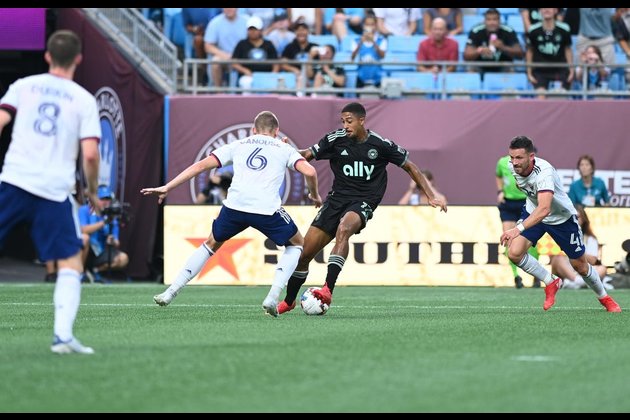 Karol Swiderski scored his team-leading sixth goal of the season and played a role in two more tallies to help Charlotte FC cruise to a 3-0 victory over visiting D.C. United on Wednesday night.

Kristijan Kahlina made a single save to record his sixth shutout of the season and fifth at home for Charlotte, which moved above FC Cincinnati into the seventh and final Eastern Conference playoff spot based on the tiebreaker of matches won.

Rafael Romo made six stops for D.C. (6-13-3, 21 points), but all three Charlotte goals came from rebounds he conceded, including a 13th-minute own goal that caromed off defender Steven Birnbaum to open the scoring.

D.C. United took their first defeat under manager Wayne Rooney in his second match in charge, but they have won only two of their last 13 to remain in last place in the East. They edged closer to missing the playoffs for a third consecutive season.

The home side were dominant for most of the evening, leading 16-9 in shots as they avenged a 3-0 defeat in D.C. in the expansion team's first-ever match on Feb. 26.

Former D.C. United players Joseph Mora and Yordy Reyna were involved in the opening goal when they combined down the left and Mora curled an outswinging cross into the box from the left.

Swiderski sent a hopeful header on goal that took an awkward deflection off a D.C. defender. Romo reacted well to save it but palmed the ball straight onto Birnbaum's chest, which deflected it over the goal line.

D.C. had its best stretch of the match early in the second half but couldn't take advantage. Charlotte punished the visitors by putting the match out of reach with two goals three minutes apart.

After a flowing attack in the 64th minute, Reyna hammered a half-volley toward the bottom left corner. Romo dove and saved it but didn't push it clear of danger, and Swiderski pounced on the rebound.

Then in the 67th, Romo saved Swiderski's header from Mora's cross from the left. But McKinze Gaines reached the rebound and sent an excellent low cross to McNeill, who hammered a first-time finish across the line before Romo had regained his position.

US, India to hold military exercise near disputed Chinese border

WASHINGTON D.C.: The U.S. will participate in a joint military exercise in mid-October with India, less than 62 miles from ...

MOSCOW, Russia: A leading Russian scientist in the field of hypersonic flight, Dr. Alexander Shiplyuk, has been arrested on suspicion ...

Citing safety of children, LA to move homeless away from schools

LOS ANGELES, California: During a meeting that was disrupted by protesters this week, the Los Angeles City Council voted to ...

WASHINGTON D.C.: The U.S. Justice Department announced this week that former Puerto Rico governor Wanda Vazquez has been arrested in ...

OTTAWA, Ontario: Military trainers from Canada will head to the United Kingdom to teach Ukrainians new techniques for fighting the ...

Domino's pizza shuts down all stores across Italy

MILAN, Italy: Milano Today has reported that seven years after launching in the country, American pizza giant Domino's has now ...

TOKYO, Japan: Toyota has advised the owners of its BZ4X electric SUV to stop driving their vehicles and return them ...

WASHINGTON D.C.: The U.S.Department of Justice is reportedly preparing to sue Google as soon as next month, claiming that the ...

Stocks in Asia tread water, Japan's Nikkei 225 the only winner

SYDNEY, NSW, Australia - Stocks in Japan surged on Friday as investors and traders returned to their desks after a ...

LONDON, England: A survey conducted by YouGov and consultancy Cebr reported that UK consumer confidence slowly rose in July, after ...