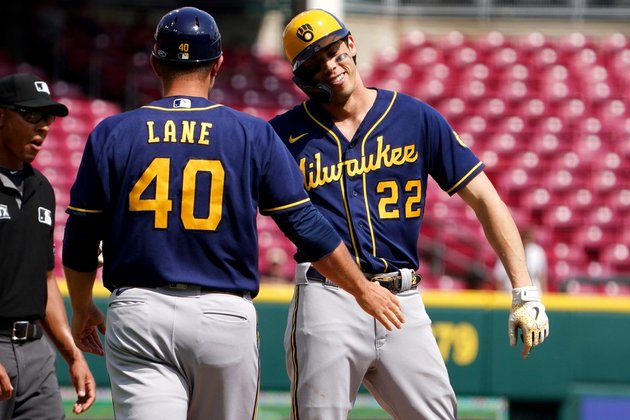 When the Miami Marlins return home Friday night after a 2-5 road trip, they will see an old friend -- left fielder Christian Yelich of the Milwaukee Brewers.

Yelich, Miami's first-round pick in 2010 and a Marlins star until he was traded to Milwaukee in January 2018, hit for the cycle in Wednesday's game, a 14-11 loss to the Cincinnati Reds.

"I'd rather win the game," said Yelich. "But anytime you can hit for the cycle, it's pretty cool."

Yelich ought to know. He has done it three times, tying him with five others for the major league record.

Yelich is one of the leaders of that offense, along with first baseman Rowdy Tellez and shortstop Willy Adames.

The other issue for Milwaukee is the absence of DH/outfielder Andrew McCutchen (COVID protocol). In addition, veteran center fielder Lorenzo Cain is slumping (.189 batting average, .472 OPS).

Milwaukee will start right-hander Corbin Burnes (1-2, 1.86 ERA) in Friday's opener. He has produced five straight quality starts, but the Brewers are just 2-4 with him on the mound this season.

Burnes is 0-1 with a 5.87 ERA in three career appearances (one start) against the Marlins.

Miami, which ranks tied for 11th in the majors in homers and tied for 15th in runs entering Thursday, has lost nine of its past 11 games. Seven of those nine losses were by one run.

The frustrated Marlins finally broke out on Wednesday, scoring eight runs in the ninth inning to beat the Arizona Diamondbacks 11-3.

"A sigh of relief," Marlins manager Don Mattingly said after the win. "Hopefully that little breakout can get us rolling."

The Marlins will start right-hander Pablo Lopez (4-1, 1.00). He leads the National League in ERA but has struggled in three career starts against Milwaukee (1-1, 5.29).

Miami is 5-1 when Lopez starts.

Offensively, the Marlins are tied for second in the majors with seven triples. That's thanks in large part to speedy second baseman Jazz Chisholm Jr., who leads the team in triples (three) and steals (six in seven attempts). But Chisholm also has power, leading the team in homers (six) and RBIs (24).

However, the Marlins have two infielders/outfielders on the injured list: Brian Anderson and Jon Berti. In addition, third baseman Joey Wendle left Wednesday's game due to tightness in his right hamstring.

"We have a lot of guys who are not yet in midseason form," Chisholm said. "But we don't give up. What you saw (in Wednesday's ninth inning) shows the promise of what we have for the future."

WASHINGTON D.C.: The U.S. State Department has announced the launch of a new program to capture and analyze evidence of ...

Popularity of Indonesian president sinks due to price rises

EAST JAVA, Indonesia: A tourist bus crashed into a billboard on a highway on Indonesia's main island of Java this ...

BELGRADE, Serbia: Belgrade was paralyzed this week by a series of bomb threats, including against schools, bridges, restaurants and a ...

WASHINGTON D.C.: In a tweet this week, Amazon founder Jeff Bezos criticized President Joe Biden for the second time in ...

As food prices rise, Iranians take to the streets to protest

TEHRAN, Iran: According to social media posts, protests that began last week across Iran over a reduction in state subsidies ...

Face masks return for workers at some Michigan auto factories

SYDNEY, NSW, Australia - Stocks in Asia mostly sank on Thursday, following on from a rout on Wall Street overnight."There ...

LONDON, England: Israeli startup REE Automotive has announced that it will build an assembly plant for electric vehicles (EVs) in ...