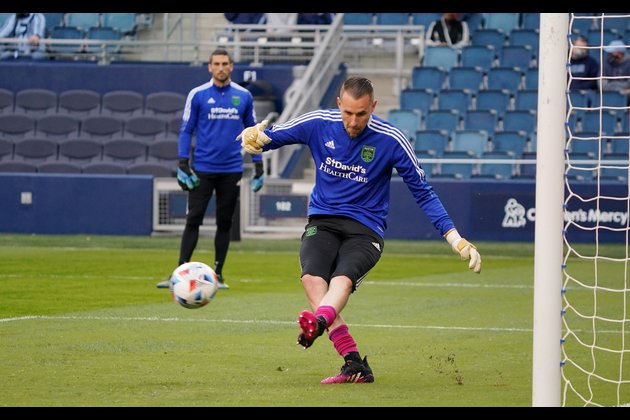 The Crew selected Scott fourth overall in Stage 2 of the 2021 MLS Re-Entry Draft, and his deal includes options for 2023 and 2024.

"We are pleased to welcome Brady to Columbus," said Columbus president and general manager Tim Bezbatchenko. "He gained valuable experience during his time in Germany, with the U.S. Youth National Team and within MLS, and we look forward to integrating him into to our goalkeeping corps."

Scott, 22, signed with Nashville SC in August 2020 but did not appear in any matches prior to being taken by Austin FC in the 2020 MLS Expansion Draft in December of that year. He appeared in seven matches while on loan to the USL's Memphis 901 FC during the 2021 season.

Anibaba, 33, has scored seven goals while registering 14 assists in 240 regular-season MLS matches. His contract includes an option for 2023 as well.

Anibaba spent the past two seasons with Nashville SC, appearing in 21 regular-season matches.

"Jalil is a veteran player with more than a decade of experience in MLS, and his addition to our roster will help bolster the backline," Bezbatchenko said. "Jalil is a leader on and off the field, and we're pleased that a player with the breadth of his experience in MLS chose to sign with the Crew, and we look forward to having him join our team."

BERLIN, Germany: Vice Admiral Kay-Achim Schoenbach, head of the German Navy, resigned due to comments he made on Ukraine and ...

LE PECQ, France: A 75-year-old Frenchman has reportedly died during a solo attempt to row across the Atlantic Ocean. The ...

PARIS, France: Two of the largest energy companies have announced that they are leaving Myanmar, citing human rights abuses and ...

MINNEAPOLIS, Minnesota: The city of Minneapolis and its mayor are being sued by restaurant and bar owners, in response to ...

U.S. unlikely to organize evacuations for Americans in Ukraine

US citizens in Ukraine advised to board commercial flights in case push comes to shove A spokesperson for the US ...

DALLAS, Texas: American Airlines has reported losses of $931 million in the fourth quarter of 2021. Additionally, officials have said ...

PARIS, France: European aircraft manufacturer Airbus has canceled a multi-billion dollar order by Qatar Airways for 50 of its single-aisle ...

SYDNEY, NSW, Australia - Stocks in Asia were mixed on Monday as investors fretted over this week's meeting of the ...

Toddler plays with phone, $2,000 in furniture delivered to home

HONG KONG: Crystal Cruises is suspending planned sailings of its two ocean-going ships and one expedition ship through 29th April, ...

MARION COUNTY, Tennessee: Following a nearly 10-year court battle, after being served commercial-grade bleach instead of water at a Cracker ...

The Docks of New York