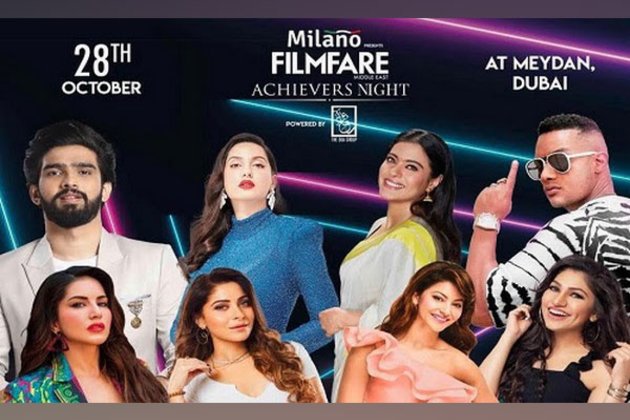 An initiative by Rizwan Sajan, Chairman of Danube Group, the much-awaited star-studded event scheduled to be held on 28th October at Meydan, Dubai, is going to infuse new vigour in the industry post-pandemic.

Attended by the who's who of the industry, A-list Bollywood stars, renowned Arab celebrities, as well as popular and well-known Influencers, among others the splendid red-carpet event will be an unforgettable entertainment and felicitation ceremony graced by oomph and oodles of talents walking the ramp and dazzling the venue.

Rizwan Sajan is the franchise owner of Filmfare Middle East in Dubai. A galaxy of local and international personalities attending the event will make it a grand evening to remember.

The proud owner of the brand Filmfare Middle East, Rizwan Sajan said, "Presenting a distinguished platform, we are here to continue the spirit of honouring the excellence in cinema industry and reaching out to millions of customers who love glitz and glamour of cine stars. Above all, we understand it our responsibility to bring to the limelight the excellent contribution of the film industry through Filmfare Middle East which has earned the reputation as the biggest identity among the film fraternity not only in India but around the globe. With the upcoming event, we look forward to welcome deserving celebrities and honouring them for popularising cinema as one of the biggest mediums and increasing its contribution in development and economic growth."Besides the highly-anticipated ceremony where Rizwan Sajan will be felicitating some of the biggest names in the industry, the event will also have LIVE entertainment, the best in food and fun unlimited. An unforgettable event, it will have the biggest stars from Bollywood walk the red carpet and entertain the audience while celebrating the glorious occasion with them.

Apart from the felicitations accompanied by the live performances and celebrity entertainment, the occasion to be attended by over 1500 people will also witness the grand unveiling of the Cover of the upcoming edition of Filmfare Middle East. This will be accompanied by honouring the frontline COVID Heroes and Cancer Warriors.

A grand evening to remember, the event will be telecasted LIVE on local TV channel along with LIVE snippets from Filmfare Middle East's social media platform. Filmfare Middle East is the region's leading title targeting fashion, beauty, weddings, lifestyle and entertainment from local and international platform.

The brand has been in the region since 2018 and has been achieving great respect and recognition amongst clients, influencers, bloggers as well as the stars from Arabic and Bollywood entertainment.

Established in the year 1993, Danube Group was founded and cultivated under the leadership of Rizwan Sajan, the Founder and Chairman of the Group. Starting off as a small trading firm, the company is moving from strength-to-strength, expanding its foothold in the region, and has established itself as the No. 1 building materials company along with other branches under its vast umbrella.

In 2019, the company recorded a turnover of USD 1.3 billion and has been growing ever since. Rizwan Sajan was ranked 12th among the 'Top 100 Indian leaders in the UAE' List by Forbes Middle East.

As one of the largest suppliers in the region, Danube Group's operations are dominated by two main segments - Building Materials FZCO and Danube Home (Home Interior/Decor Solutions), which brings together a variety of state-of-the-art products available at showrooms strewn across the MENA region.

This story is provided by NewsVoir. ANI will not be responsible in any way for the content of this article. (ANI/NewsVoir)

SINGAPORE: Three months after Cambodia rolled out COVID-19 vaccines, just 11 percent of its population had received at least one ...

El Salvador plans to locate Bitcoin city at base of volcano

SAN SALVADOR, El Salvador: El Salvador President Nayib Bukele has announced plans to build a Bitcoin city at the base ...

US announces that 95% of federal workers vaccinated

WASHINGTON D.C.: Some 95 percent of U.S. federal workers have received at least one dose of a COVID-19 vaccine, or ...

Of 32 scholarships, 22 awarded to US women as Rhodes scholars for 2022

OXFORD, England: The Rhodes Trust has announced the 2022 class of U.S. Rhodes scholars, which includes the largest number of ...

KABUL, Afghanistan: Under new rules imposed by the Taliban government, women have been banned from appearing on television dramas in ...

DHAKA, Bangladesh - On Tuesday, a Bangladeshi Vijay Dutt (40), known as 'Momin,' was apprehended for running a sex racket ...

WASHINGTON D.C.: To encourage a drop in sky-high gasoline prices, President Biden said the Department of Energy will release 50 ...

Vonage sells to Ericsson for $6.2 billon in merger of tech giants

DUBAI, UAE: Israel and Jordan have signed what is being labeled a most significant cooperation agreement to construct a major ...

To improve supplies, Samsung to build chip factory in Texas

SAN JOSE, California: Samsung Electronics will build a $17 billion semiconductor chip factory in Texas, in a bid to increase ...