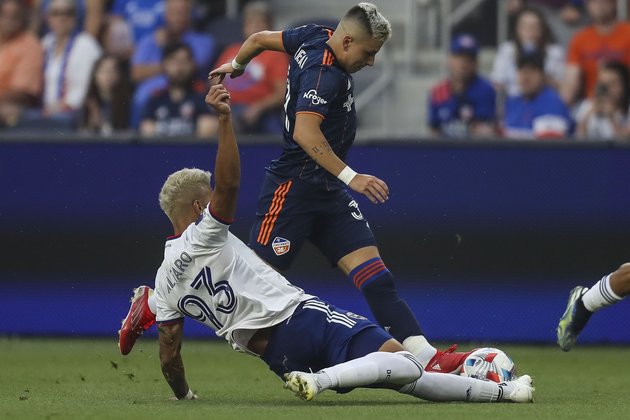 Despite finishing the match with nine men, D.C. United managed to walk away with a point from a 0-0 draw against host FC Cincinnati on Saturday night.

Amid a scoreless contest, FC Cincinnati caught a major break in the 52nd minute when D.C. United's Moses Nyeman was shown a red card for blatantly pulling down a streaking Brenner. Then in the second minute of second-half stoppage time, Joseph Mora was sent off following his second yellow card of the evening.

However, Cincinnati (3-7-5, 14 points) was unable to take advantage of the major opportunity and slipped to 0-3-3 at its new home stadium this season. The hosts pressured, but either mis-hit balls from close range, like Luciano Acosta's sliding straight-on miss, or were stymied in the box by a compact United defense.

D.C. (6-7-3, 21 points), meanwhile, showed some mettle to earn its fifth point from the last three matches. Though the Orange and Blue found themsleves in a strong position to strike following Nyeman's booking, D.C. got the next best chance.

In the 61st minute, Cincinnati goalkeeper Kenneth Vermeer was forced to make back-to-back catches on Yordy Reyna. FC Cincinnati had a quality chance in the 71st minute, but Joe Gyau's point-blank header was caught easily by United keeper Bill Hamid.

It looked as if United had opened the scoring in the third minute when Nyeman headed home his first MLS goal. However, upon VAR review, the play was deemed to be offside. In the 25th minute, Reyna's goal was also rubbed off when the offside flag rightfully went up.

Though Cincinnati matched D.C. United with four total shots and one on target in the first half, it did not have many serious scoring chances. Hamid did make a diving interception of an FCC cross in the box near the midway mark of the first half.