Jets Notebook | Corey Davis: 'We Have the Right Pieces' 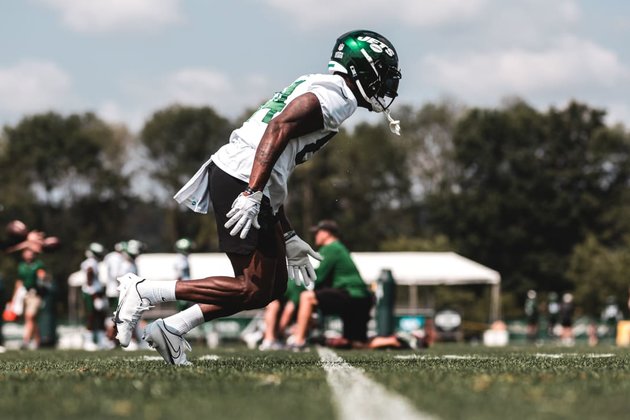 For Jets wide receiver Corey Davis any day on the football field is a good day. Davis, signed in free agency from Tennessee, is part of a receiving corps that could emerge as one of the best position groups on the team.

"I feel like we've got a lot of potential," Davis said during the first week of training camp. "We've got a lot of guys who can do a lot of things with the ball. We have the right pieces, we just have to put it together. Today [Day 1 on the field on Wednesday] was a good day for the boys. We just gotta build on that."

"My mentality is a lot different," Davis said. "Route running, I'm more comfortable reading defenses and feel more like a veteran. I'm able to play fast and take a lot of thinking out of it. I feel good. Really good."

Though it's early, most observers see Davis as the Jets' No. 1 receiver among a group that has the potential to provide offensive coordinator Mike LaFleur with multiple options. In addition to Davis, the unit has been bolstered with the signing of Keelan Cole and the addition of draft pick Elijah Moore. Add veteran slot receiver Jamison Crowder, second-year wideout Denzel Mims and Braxton Berrios, and in the space of a few months the Jets wide receivers room is bursting at the seams.

As one of the top free-agent signings of general manager Joe Douglas, Davis knows it's time to produce.

Carl Lawson Has an Eye on Tokyo

As the Jets and their new defensive end Carl Lawson get ready to put on the pads next week in training camp, the former Cincinnati rusher will be paying special attention to events at the 2020 Olympics in Tokyo on Friday night.

Rachel Dincoff, Lawson's girlfriend, is representing the U.S. in the women's discus throw after finishing third at the domestic track and field trials recently in Oregon.

"Elijah, he's a great player, man, a great dude," wide receiver Corey Davis said. "He's real comfortable out there, like he's been here before. He doesn't really seem like a rookie. His mindset is crazy. He's out there, he's leading the guys, and I'm real happy we got this dude.

Head coach Robert Saleh has been generous with his praise of Moore, 21, ever since that night in late April the Jets were stunned to find the dynamic receiver still available in the second round of the 2021 NFL Draft.

"He walks in that building, and you'd think he's been in this building for 10 years," Saleh said. "He asks all the right questions. He's putting in the work. He's an impressive young man. Excited to see him grow."

From the get-go, head coach Robert Saleh has been upfront and candid about the need to alter the culture all around One Jets Drive.

"I'm fortunate because our staff is phenomenal, our players are phenomenal, [GM] Joe [Douglas] has been fantastic," Saleh said. "All of them, there's such a tremendous amount of great characters in this building, and I have yet to run into a jerk, if you will. They all want to work, they all want to get better, they're all trying to find a way to win football games, and I think that's what makes this job easy, and that's what makes it fun, being around good people who just want to win football games. So, knock on wood, hopefully it keeps going, right?"

"Being in his building and around his staff, there's no doubt as to the culture he's trying to instill," Van Roten said. "You hear it all the time: 'All gas, no brake. Cut it loose, play fast, have fun.' He really kind of simplifies what he's asking of you. That makes it easier as a player. He's been a joy to be around these first few months. I'm excited for training camp. I'm really excited about the trajectory of the team."