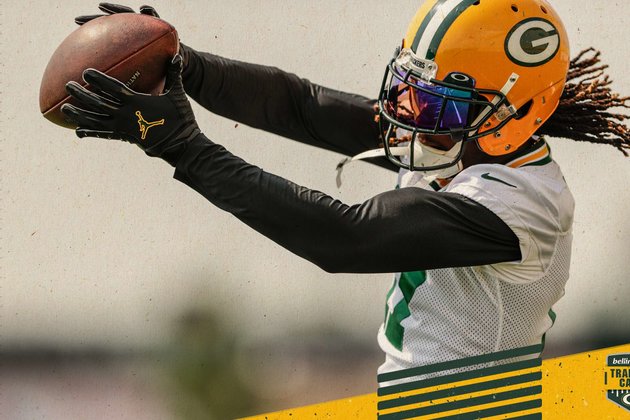 Aaron Rodgers was on point in the red zone, and rookie center Josh Myers has moved on from his early miscue Mike Spofford

GREEN BAY - Practice No. 3 of training camp Friday was a tad shorter than the first two. Here are five things learned.

1. The Packers' top-ranked red-zone offense from 2020 is in top gear already.

Green Bay's 80% touchdown rate (48-of-60), best in the league this century, appears to have carried over to Ray Nitschke Field. In one sequence, quarterback Aaron Rodgers completed four TD passes on four consecutive red-zone snaps.

First, he threaded a tight throw to tight end Robert Tonyan at the goal line. Then he hit rookie receiver Amari Rodgers on a crossing route. Next was a blitz-beating fade to Davante Adams over rookie first-round corner Eric Stokes, and finally, another tight end scoring toss, this one to Jace Sternberger.

The real highlight was the fade to Adams, executed perfectly with a soft-touch throw and well-timed leap from Adams. It's not as though Stokes was burned in coverage, but he basically had no chance.

"There's not many 12's and 17's out there. That's pretty much all you can say," safety Darnell Savage said after practice, regarding what to say to Stokes. "Just the fact he can see that close up now is a big bonus."

2. Rookie center Josh Myers is learning quickly that Rodgers' cadence can be tricky.

Nothing like trying to nail down a starting job as a rookie center for a three-time MVP QB and botching the first snap of the first practice in training camp.

But that's what Myers, the second-round pick from Ohio State, did on Wednesday, and he's able to chuckle a little about it now.

"It's funny, I jumped the gun a little bit early on the first play of the first practice," Myers said. "I'm sure you guys were wondering what happened with that snap. I was just a hair early, and we had a conversation about that and how his cadences can be a little different."

Myers by no means blew off the mistake, though. In the moment, he had to move on, but it was the play he thought about the most after his first camp practice as an NFL player was over. In the last two practices, there don't appear to have been any snapping issues.

"I definitely want to do right by him," Myers said of Rodgers. "So it's frustrating when things like that happen sometimes. Just me as a person I want so badly to get it right. So it's tough, but that's something I reflect on after practice. As soon as that happens I don't really have a whole bunch of time to think about it. I got to go to the next thing right away."

3. The defensive backs' familiarity with one another is expected to pay dividends.

The rookie Stokes has been added to the top group, but otherwise, Savage, Adrian Amos, Jaire Alexander, Chandon Sullivan and Kevin King (currently not practicing) are entering their third year together in the Packers' secondary.

Even though it's the first season in new defensive coordinator Joe Barry's system, all the games and snaps the veterans have under their belts have helped keep the communication simple and effective during the transition.

"If you're on the same page, there is no wrong page," he said.

The veteran offensive lineman whom the Packers signed this week has caught a touchdown pass on a tackle-eligible play in both the regular season and postseason.

He chalked up the two scores in 2019 playing for Tennessee. First, he caught a 1-yard TD pass from Ryan Tannehill against Jacksonville in late November. Then two months later, the Titans dialed up the play again in the AFC Championship Game in Kansas City, and the 6-foot-8, 321-pound Kelly scored again from 1-yard out.

"Cool moment. I kept the balls," he said. "I'm a record-holder for being the fattest guy to catch a touchdown in an NFL playoff game, so you take that for what it's worth."

The playoff touchdown gave the Titans a surprising 17-7 lead over the Chiefs midway through the second quarter, but Kansas City would rally to win, 35-24. So Kelly knows the late-season disappointment many of his new Green Bay teammates have dealt with in recent seasons.

"Obviously the whole goal is to win the last game of the year in February," he said. "The last couple years in Tennessee, they were pretty successful and we got pretty close. It's definitely on the radar, in my mind, and you prepare to be playing in winning, competitive football games late into the year, early into next year. That's the approach every day."

5. Saturday's practice will be the longest of camp thus far.

Friday's shorter workout preceded what will be a more extensive session on Saturday before the players' first day off on Sunday.

"I think we're always pretty mindful of the third day in a row and then we'll crank up the intensity level a little bit more tomorrow," Head Coach Matt LaFleur said.