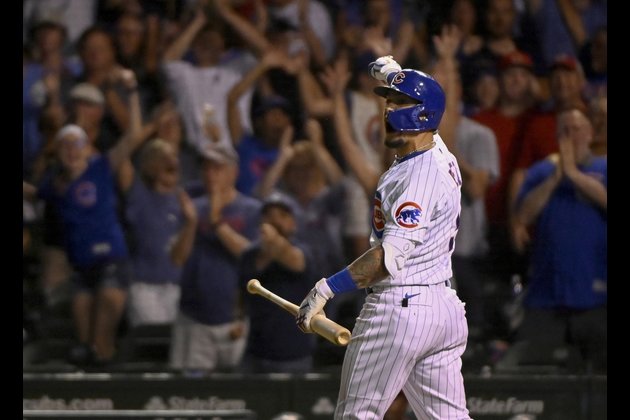 The Mets' need for that energy increased even before Baez arrived in New York.

Baez is expected to make his Mets debut Saturday night, when he will try to spark a team reeling from more bad news regarding Jacob deGrom as New York faces the visiting Cincinnati Reds in the middle game of a three-game series.

The Reds won the opener 6-2 Friday night, when Joey Votto hit a homer for the seventh consecutive game and Jonathan India had two homers and three RBIs.

The Mets' loss was overshadowed by the news generated before first pitch.

While Baez -- acquired along with right-handed starting pitcher Trevor Williams in exchange for minor league outfielder Pete Crow-Armstrong -- will provide an upgrade at shortstop until Francisco Lindor returns, New York's postseason hopes took a hit when Scott said deGrom would be shut down until September due to inflammation in his right elbow.

deGrom generated comparisons to Bob Gibson during a brilliant first half in which he posted a major-league-best 1.08 ERA. However, he was placed on the injured list because of right forearm soreness July 18 and experienced his latest setback following a bullpen session Thursday.

"We thought everything was progressing OK -- day-to-day (was) how we were approaching it even though we didn't have a target for him to pitch," Mets manager Luis Rojas said Friday night. "So now the focus goes to the two weeks that he's going to have of no (throwing) and let's see how he responds. But the importance of Jake here -- you guys can say it's immeasurable."

The Reds are using far more upbeat tones to utter gaudy adjectives about their franchise player, who is on the verge of joining one of the most select clubs in baseball history. Only three players have homered in eight straight games -- none since 1993, when Ken Griffey Jr. tied the record set by Dale Long in 1956 and equaled by Don Mattingly in 1987.

Long was 30 years old when he established the mark while Mattingly was 26 and Griffey just 23. Votto turns 38 in September.

Hill will make his second start since he was dealt to the Mets by the Tampa Bay Rays on July 23. The 41-year-old didn't factor into the decision Sunday, when he gave up three runs over five-plus innings in New York's 5-4 win over the Toronto Blue Jays.

Nor did Miley factor into the decision Monday after surrendering three runs over 4 1/3 innings during the Reds' 6-5 loss to the Chicago Cubs. He is 4-0 with a 2.42 ERA in his past 10 outings.