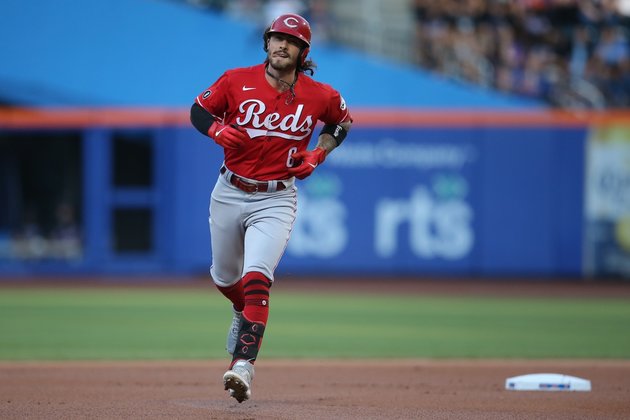 Votto led off the sixth by hitting a 2-0 fastball from New York reliever Drew Smith over the center field wall to give the Reds a 3-1 lead. The ball easily cleared the wall and Votto flexed to the crowd after crossing home plate in response to some fans chanting "overrated" at him.

Votto moved within one of the major league record for consecutive games with a homer. Dale Long did it in 1956 with the Pittsburgh Pirates, Don Mattingly achieved the feat in 1987 with the New York Yankees and Ken Griffey Jr. did it in 1993 with the Seattle Mariners.

Votto homered again after hitting six homers in Cincinnati's four-game series against the Chicago Cubs that matched the record for most homers by an opposing player at Wrigley Field.

India homered on the game's first pitch and then blasted a two-run shot in the ninth to give the Reds a 6-1 lead. He became the third Reds hitter to homer on the first pitch of a game this season and recorded his first career multi-homer game.

India reached four times and also scored the tiebreaking run on a single by Jesse Winker in the fifth off Miguel Castro (2-3).

Cincinnati's Sonny Gray (3-6) allowed one run and five hits in six innings. He struck out seven and walked one after allowing the first four hitters to reach.

Jeff McNeil and pinch hitter Brandon Drury hit RBI doubles for the Mets, who acquired Javier Baez from the Chicago Cubs before the trade deadline and also sported black jerseys for the first time this season.

Mets starter Carlos Carrasco allowed one run on three hits in four innings after missing three months with a hamstring injury. Carrasco struck out four, walked one and became the 56th player to appear for the Mets this season, tying the team record set in 2018.

After India's second career leadoff homer, the Mets tied it when McNeil extended his hitting streak to 16 games. New York had the tying run on deck against Amir Garrett but the game ended when James McCann struck out with runners at second and third.