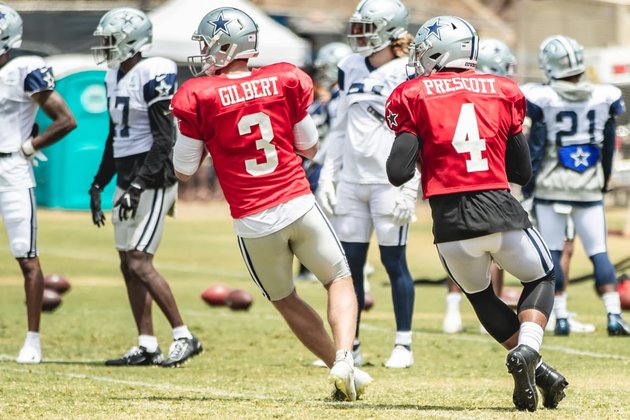 OXNARD, Calif. - Defensive tackle Neville Gallimore inadvertently hit the nail right on this head Tuesday when he said this about the pads coming on Wednesday:

"That's when the real training camp starts. ... You guys will see the real show go on."

Sure enough, the pads came on, and as usually takes place in training camp, there is always something. And there was out here at the River Ridge Sports Complex.

It was Dak, Dak Prescott, you know.

Not his ankle, not the one suffering a dislocation and compound fracture on Oct. 11 of last year, costing him the final 11 games of a 2020 season quickly spiraling out of control.

Nope, it was initially thought to be his arm. The right one.

Initially thought to be just sore.

But hey, after last year, after the Cowboys signing him to a four-year, $160 million contract back in March, things will stop down at camp when seeing No. 4 in his red jersey trotting up the walkway and into the locker room when the team is only in Period 7, right at the start of the next "team" session. Then following a tad later is Cowboys head trainer Jim Maurer, who previously was seen working under Prescott's right shoulder pad.

Now that will cause a commotion.

But then when Dak's interview sessions with the TV stations covering camp got delayed from 2 p.m. to 2:30 and then to 6:15 out here on Pacific time, something seemed fishy. And at 4:09 p.m., the Cowboys sent out a release stating out of an abundance of caution Dak underwent an MRI, revealing Prescott instead had suffered a muscle strain in his right shoulder, stating he will be treated and further evaluated on a day-to-day basis.

"I felt some soreness when making certain throws today, and I really just decided not to push things too far," Prescott said in a statement sent out with the release. "Better to be cautious and smart about it. I don't see this as any kind of serious setback. We'll treat it on a daily basis, and I'll be fine."

Depending on the severity of the strain, Prescott would have five weeks between now and the week leading up to the Cowboys' Thursday, Sept. 9, season opener against Tampa Bay. Plus, he is unlikely to play in the first preseason game, Aug. 5 in the Hall of Fame Game, and who knows, maybe no more than a quarter at most in the second one in Arizona.

Now, quarterbacks suffering soreness in their throwing arm/shoulder is not unusual early in camp when their throwing reps ramp up. But again, when it's Dak, and after last season, not the greatest of _shots_ to start things off with.

No Fly Zone: The Cowboys much-maligned defense of last year, one struggling to pick anything (10 interceptions, tied for fifth fewest in the league), suddenly came to life during practices these past two days. Had five interceptions during the various drills on Tuesday and then another four by my count on Wednesday, those belonging to Micah Parsons, Israel Mukuamu, Darian Thompson and Anthony Brown. Maybe rookie cornerback Kelvin Joseph knew what he was talking about when saying after Tuesday's practice, "We gonna fly around; no fly zone. We gonna call it 'airplane mode.' So when you drop this interview tell 'em, Kelvin Joseph says, 'Airplane mode.'" Consider it done. Run DC: The interceptions are great, but maybe the Cowboys' biggest defensive problem last year was their run defense, finishing 31st in the NFL, giving up 158.8 yards a game, totaling 2,541 yards, second most in franchise history, the 2,636 record set in the 2000 season. "Obviously run defense is a primary focus for us," head coach Mike McCarthy said. "We have to train more tilted to running the football and stopping the run in training camp. That needs to be a strength, and it was not last year." Can say that again. Hooker Signed: Not sure I've heard this one before, but when looking at this Cowboys roster now, Maybe you never have enough safeties. Because not only did the Cowboys sign three free-agent safeties early in the offseason - Demontae Kazee, Jayron Kearse and Keanu Neal (also a linebacker) - not only did they draft Mukuamu, a cornerback they moved to safety, and not only did they retain last year's 10-game starter Donovan Wilson and seven-game starter Darian Thompson, but now they have signed free agent free safety Malik Hooker to a one-year deal. Hooker is coming off last year's interrupted season by a ruptured Achilles on Sept. 20, the Cowboys thinking adding another talented safety - Hooker was the 15th pick in the 2017 draft by the Colts - can't hurt. When Hooker was asked Wednesday about his game, he said, "Game-changer. Athletic ballhawk. Vocally, I'm a leader." He'll have his chance, giving the Cowboys yet another safety on a one-year, prove-it contract. Shot Incentives Increasing: The NFL is not done yet trying to convince players to get vaccinated for COVID-19. Just this week more protocols have come out for unvaccinated players. Not only do teams have to provide visible markings on unvaccinated players, but now those players must wear masks at their facilities at all times unless the mask might interfere with their ability to engage in athletic activity. Also, any player refusing a virus test will be fined $50,000 and $14,650 for not wearing their contact-tracing tracker. Camp Shorties: It's one thing for your last name to be Gallup, but Michael, you don't have to gallop full speed into a fence trying to catch a touchdown pass, then having to reach out, grab the top bar and to perform a front somersault over the fence, landing in a sitting position. Guess he is lucky he only tweaked an ankle, sitting out Wednesday's practice ... Also rehabbing a second day in a row is first-team nickel cornerback Jourdan Lewis, who better watch out or he might get Wally Pipped (look him up) since his immediate replacement, Maurice Canady, has his fingerprints all over the football these past two days ... Backdrop for practice Wednesday morning was two brush fires in the nearby vicinity of the Santa Clara river bottom, the smoke visibly rising over the practice fields, and several helicopters could be seen flying over dumping water trying to extinguish the flames ... This is the time of year any disgruntled player wanting to be traded gets linked to the Cowboys. Just remember, when it comes to salary cap room, the Cowboys have roughly no more than $4 million in space, and that's for just their top-51 player salaries ... Hooker, who basically was watching practice on Wednesday and doing some conditioning training, wasn't exactly a stranger to a few players when he arrived since Cowboys wide receiver Noah Brown was his roommate when both were at Ohio State, and he also had played with Ezekiel Elliott and wide receiver Johnnie Dixon.

Today's last word goes to Cowboys' fourth-year tight end Dalton Schultz when asked if he's a more confident player after last year's performance taking over for starter Blake Jarwin, who went down with a torn ACL 25 snaps into the first game of the season.

"A lot more (confident)," Schultz said. "Last year I thought I could do it, and this year I know I can do it."

That's what catching 63 passes for 615 yards and four touchdowns will do for you.