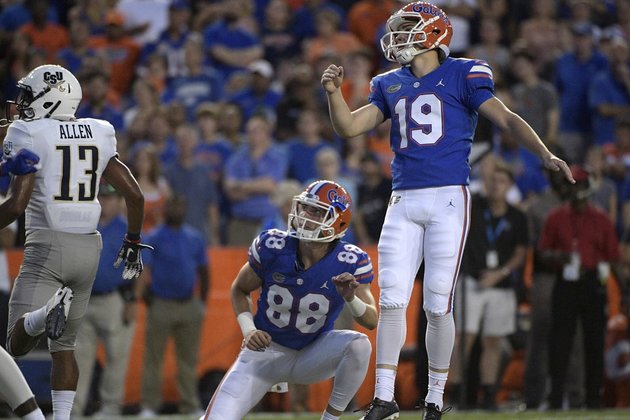 No team has ever taken a kicker in the 85 years of the NFL Draft without getting ripped. Bengals special teams coordinator Darrin Simmons shrugs and recalls the video old friend Shayne Graham sent of Evan McPherson's two 68-yard field goals in practice.

"Not too many people on the planet can do that," Simmons said Monday of his brand new fifth-rounder.

Graham, the first Bengals kicker Simmons ever had 19 seasons ago, never made it into that orbit. After coaching the newest Bengals kicker as Florida's quality control coach on special teams last year, he confirms McPherson's trajectory is limitless.

"He hits the ball better now than I did in my prime," said Graham, who wasn't exactly earthbound as the most accurate kicker in Bengals history during a 15-year NFL career.

"He's physically gifted. I believe he's going to evolve into a premier NFL kicker. Just hearing the ball come off his foot and seeing him swing his leg is very aesthetically pleasing for me to watch."

Graham and Simmons have known each other since McPherson was three years old during their season together in Carolina in 2002. The next year, when Simmons became the Bengals special teams coordinator, he re-united with Graham four days before the opener after Neil Rackers was hurt in the pre-season finale.

That lasted for seven seasons and a Pro Bowl and they're still close, texting and calling with Graham making appearances at various Bengals camps as a visiting coach.

"I trust Shayne's opinion," Simmons said. "He had some very favorable things to say about Evan and that helps. He can re-affirm some things or put some things to rest. But I like to form my own opinion. Ultimately, it's my butt."

Simmons knows the company line on kickers. According to ESPN.com, going into last season only two of the 10 most accurate kickers in NFL history were drafted in Harrison Butker and Stephen Gostkowski.

The best in the game, Justin Tucker, is undrafted. So is the most clutch kicker of this century, future Hall-of-Famer Adam Vinatieri. Even Butker didn't stick with his first team. The one time Simmons did draft a kicker, fifth-rounder Jake Elliott in 2017, Elliott didn't win a training camp competition and moved to the Eagles. And the Bengals' other kicker, Austin Seibert, like Elliott, is a fifth-rounder working on his second team

But we know Simmons' take. In the fifth round you're more than likely talking about a back-up player stacked up against a kicker that in all likelihood is going to start.

"Why not bring in a guy that you think can help you? It's like any other position," Simmons said. "You look at the specialists and there are only a handful of kickers, punters and long snappers that are good enough to be drafted. It's not like there are 35 corners up there on the board that you can take at various points in the draft. There are maybe two or three of these guys and if there are ten teams with a need, you better jump up and get them."

The way Graham looks at it, if you take scoring seriously, why not take one of the elite? Besides, he's pretty sure McPherson was gone by the time they picked in the sixth round.

"There were other teams calling besides the Bengals," Graham said. "If they didn't take him then, he'd be somewhere else."

And the Bengals signaled they had a need when they moved on from Randy Bullock, the guy that knocked out Elliott. It sounds like Simmons is making sure McPherson gets to the gate, giving him his first Opening Day rookie kicker.

It also sounds like McPherson has heard enough NFL stories and absorbed plenty of big-league advice from Graham to have an idea what he's in for.

"I think the things that separate an NFL kicker from a good college kicker are what's going on between the ears. The mental part is really important," McPherson said. "I know from experience that a (missed) kick doesn't mean much after the fact the next day. (Graham) told me, don't let it get into your head. Don't let the media distract you from what you're trying to do. The only thing that matters is the next game, the next kick."

When McPherson barely missed a 51-yarder at the gun in a 37-34 loss to LSU (Graham: "We thought he made it. It was inches. It had 15 yards to spare."), Graham loved his demeanor when he came back the next week in the SEC title game against Alabama. He hit his only field-goal try, a 40-yarder, and all five extra points.

"As gifted as this kid is physically, what sets him apart is what kind of person he is," Graham said. "Humble. Well-mannered. He's very coachable, very open, doesn't have an ego. He's willing to listen to suggestions. He's steady. An unshakeable confidence. "

And talk about first-round pick Ja'Maar Chase being a seamless scheme fit into a Joe Burrow offense. Graham is basically the assistant special teams coach who sets up the practice scripts and the formation cards and schools the kicking team on situations.

"A lot of what Darrin did smeared off on me," Graham said.

Simmons, the most tenured specials teams coach in the league, is known for his punishing attention to even the tiniest speck of detail.

"(Graham) was always making sure we knew every situation on field goal, kickoff or punt," McPherson said. "I guess he got a little of that from Darrin."

McPherson did get the Simmons treatment at his impressive 21 of 22 pro day. Simmons asked if he could hold on four field-goal tries. After he played the first two straight, Simmons pulled out what he likes to call the "Okie-Dokie." It could be anything to distract. Just to see how he responds in the moment when something isn't right.

"The third one he dropped on purpose and was kind of slow getting it up there for me," McPherson said, "And the fourth he had me staring right at the laces. But I put all of them through, so I was hoping that really impressed him."

Probably not. But this will.

"I look forward, honestly to that day Evan calls me and says, 'Hey, we were sitting in a meeting and Darrin started us asking about situational stuff,'" Graham said. " 'And I knew the answers because you already gave them to me before I ever knew who Darrin was.'"