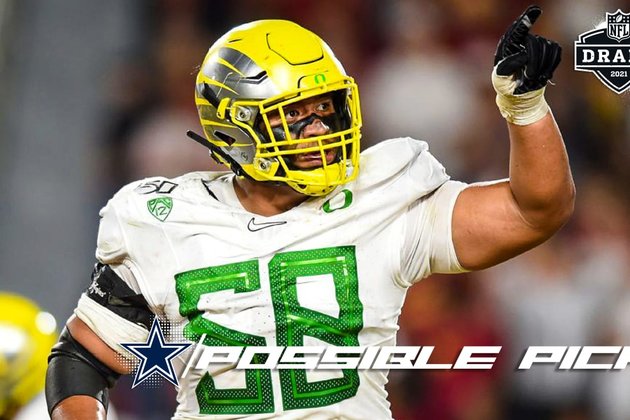 While the start of the 2021 NFL Draft is next week, it's still anyone's guess as to how the draft will turn out, especially for the Cowboys, who hold the No. 10 overall pick.

The staff of DallasCowboys.com has tried to narrow down a few names that could be targets for Dallas, either with the current pick or perhaps a trade. Today's featured player is Oregon's Penei Sewell.

Name: Penei Sewell Position: Offensive Tackle College: Oregon Height/Weight: 6-5/331 Did You Know?: Sewell was an opt-out in 2020 because of COVID-19, but in 2019 he became the first sophomore offensive lineman to ever win the Outland Trophy.

Where He's Projected: Sewell has been one of the names to know in this draft cycle for the better part of a year. His stock has fluctuated to a degree, but it's widely acknowledged that he will likely be a Top 10 pick, as well as the first offensive lineman to hear his name called on Thursday night.

Whether that means he'll fall to the Cowboys at No. 10 is up for debate. There are several teams ahead of them, such as Cincinnati and Miami, that could use help along the offensive line. But with so many talented offensive skill players available at the top of this draft, it's not out of the question that Sewell could see himself slide a little bit.

There's also the matter of Northwestern's Rashawn Slater. Another blue chip tackle prospect who we'll also talk about in this series, Slater is seen by many as the best tackle prospect in this class. If a team above Dallas opts for Slater over Sewell, it's possible the Oregon All-American could be sitting there in the 10 spot.

How He Helps The Cowboys: The answer to that question should be obvious to anyone who watched this team last season.

The Cowboys lost La'el Collins to a hip injury during training camp, and Tyron Smith managed to play just two games before a neck injury shut him down for the year. The result was a hodge-podge of inexperienced offensive tackle play, with youngsters Terence Steele and Brandon Knight having to shoulder the load for much of the year.

Collins and Smith are both expected back in 2021, but last season was a bit scarring. It's also worth noting that 2020 was the fifth-straight season in which Smith has missed time due to injury.

Sewell would be a top-notch insurance policy in case that happens again. It's unlikely he would play guard, but for the time being he'd be one of the best swing tackles in the NFL, with the obvious ability to step in if needed. In the long-term, he'd be Smith's eventual successor as a potential Pro Bowl left tackle.

Bucky's Bottom Line: "Penei Sewell is a talented offensive tackle prospect with a rare combination of size, strength, agility and skill. He is a dancing bear on the edge with ballerina-like feet and quickness. The 6-foot-5, 331-pounder is a natural mover with the balance and body control to climb to the second level in the running game or lead in space on screens. Sewell's athleticism, footwork and anchor ability enables him to stymie pass rushers with a mix of finesse and power that separates him from others at the position. If evaluators are looking for an elite offensive tackle prospect either he potential to dominate on the edges for the next decade, the Oregon standout should be at the top of the list." - Bucky Brooks