Browns' Garrett says helmet incident is in the past 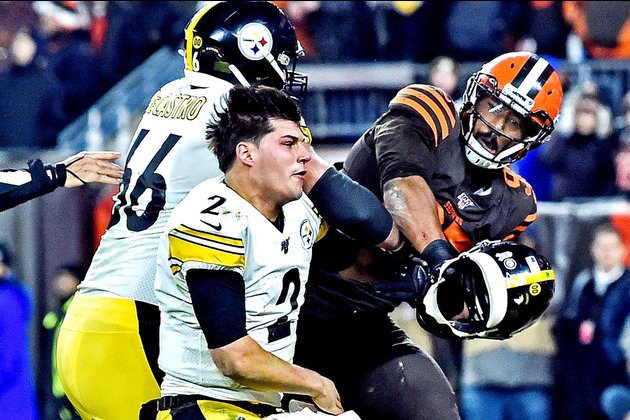 The last time the Cleveland Browns and Pittsburgh Steelers played each other, Myles Garrett was using a helmet as a weapon and earning a season-ending suspension.

The two teams square off again Sunday in Pittsburgh and Garrett, the star defensive end for the Browns, is expecting a clean game without skirmishes.

Garrett said he has moved past the incident from last November in which he ripped the helmet off the head of Mason Rudolph and smacked the Pittsburgh quarterback in the head. He missed the final six games of the campaign due to the suspension.

There will be approximately 5,500 fans in attendance, and Garrett is expecting a frigid greeting.

"You've got play within yourself and not allow those emotions to guide you and your actions," Garrett said. "Just play how you always have, no matter if someone's there or no one's there."

The 24-year-old Garrett said he hasn't considered seeking out Rudolph. In the aftermath of last year's incident, Garrett accused Rudolph of using "the N-word."

Ben Roethlisberger, who missed most of last season with an elbow injury, is back as Pittsburgh's quarterback. That leaves Rudolph as an unlikely on-field participant.

"I haven't thought about it," Garrett said of speaking to Rudolph. "Focusing on how I'm going to get to Ben. I'll cross that bridge when I come to it, whether that's down the road or whenever we see each other. I'm just focused on the game plan and getting the win. That comes secondary."

The Browns (4-1) are off to a strong start and the Steelers (4-0) lead the AFC North, a division in which the Baltimore Ravens (4-1) are also playing well.

Garrett has been superb and ranks second in the NFL with six sacks. He is tied for the league lead with three forced fumbles. He has 36.5 career sacks in 42 games.

The incident surely didn't hurt the stock of the former No. 1 overall pick with the Browns. Cleveland signed the fourth-year pro to a five-year, $125 million extension in July.

But he knows the spotlight will be on him Sunday so he will be focused on keeping his cool.

"We won't be worried about what they're doing to frustrate or knock us off our game," Garrett said. "But I think they're going to play a clean, fair game, and we're going to do the same."

Also on the line is Cleveland's long history of dismal results at Heinz Field. The Browns last won in Pittsburgh in 2003 and have dropped 16 straight visits.

"We get a win there," Garrett said, "and most people would give us some respect and see us as a legit team across the league."

An outbreak of coronavirus in Ireland has been attributed to a flight from a country in the Middle East into ...

The U.S. space agency, NASA, reported Monday it has confirmed water can be found in sunlit areas of the moon, ...

America, damaged and divided, prepares to go to the polls

US President Donald Trump and his Democratic challenger Joe Biden are battling for the presidency of a deeply divided country, ...

RIVERSIDE, California - A U.S. man has been sentenced to twenty years in federal prison for conspiring to commit terrorist ...

SYDNEY, NSW, Australia - Stocks in Asia were relatively quiet on Tuesday compared to the volatility and substantive sell-offs on ...

UK needs to decide between bargaining power and negotiation strategy

LONDON, UK - Reaching an agreement in trade deals is, in the best of times, a long process. There are ...

SYDNEY, NSW, Australia - Stocks in Asia were limp on Monday, although the Hong Kong market showed some life.In Tokyo, ...