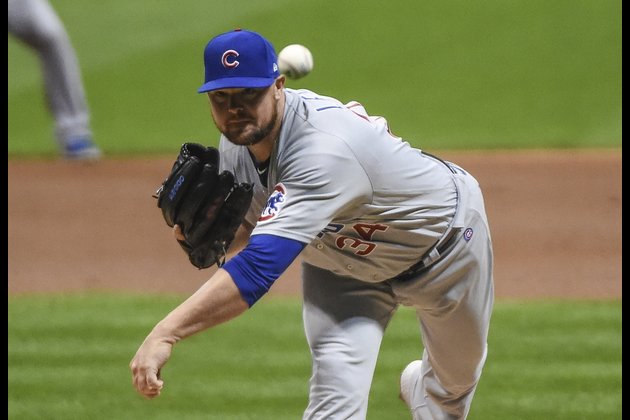 The Chicago Cubs will go for their fourth win in a row when they host the Cleveland Indians on Wednesday.

The Cubs (29-20) are coming off a 6-5 win in the series opener, when Cameron Maybin was hit by a pitch in the bottom of the ninth to force in the decisive run. Chicago improved to 3-0 this season against Cleveland as it looks for another two-game sweep.

Meanwhile, Cleveland (26-22) is hoping to snap a seven-game losing streak, its worst stretch of the season.

Indians president of baseball operations Chris Antonetti remains confident that his team can make a deep playoff run, even if it happens to qualify as a seventh or eighth seed in the newly expanded postseason.

"We've seen in the past where teams that have been really hot the last week get into the postseason and are not so hot in that first round," Antonetti recently said to reporters. "But we've also seen teams like ours in 2016, where we fought hard to get in. We kind of had a good year but had some ups and downs, but we got to the postseason and things continued to click for us and we got hot and ran that all the way to Game 7 of the World Series. I think it's possible.

"I think our focus right now, though, is: How do we right the ship? How do we get back to playing winning baseball and win as many games as possible to give ourselves the best position in the postseason?"

Chicago also is focused on a run toward the World Series for the first time since 2016, when it topped the Indians in a seven-game series.

On Wednesday, the Cubs will turn to veteran left-hander Jon Lester (2-2, 5.05 ERA) for his 10th start of the season. The 36-year-old veteran has 192 career victories, 76 of which have come with Chicago.

Lester endured a tough start to the season but is coming off one of his best performances. He pitched six scoreless innings Friday while striking out eight against the Milwaukee Brewers.

A mechanical adjustment was the key to Lester's improved start. He has 12 walks and 37 strikeouts in 46 1/3 innings on the season.

"I just needed to figure out what was going on," Lester said to reporters. "I don't want to say we reinvented the wheel or we found some magical cure or anything, but the adjustments that we did make in my bullpen, the stuff just translated better."

The 25-year-old right-hander is looking to snap a four-game winless streak. In his most recent start, last Thursday, he allowed four runs on seven hits in six innings during an 11-1 loss to the Kansas City Royals. Civale struck out seven and walked one.

This will be Civale's first career start against the Cubs.

Life could be habitable underground on Mars, scientsts say

MASSACHUSETTS, September 23 (ANI): Recent science missions and results are bringing the search for a life closer to home, and ...

Frantic efforts to rescue whales trapped on sandbars off Australia

PanARMENIAN.Net - Rescuers were scrambling on Tuesday, September 22 to save 270 whales stranded off the coast of the Australian ...

CAMBRIDGE, UK - Scientists at the Massachusetts Institute of Technology (MIT), along with others, have discovered an Earth-sized "Pi Planet" ...

U.S. goes it alone on Iran sanctions, setting stage for showdown at UN

SYDNEY, NSW, Australia - Stocks in Australia took off on Wednesday, following the lead in the U.S. and Europe overnight. ...

Uzbekistan turns to its massive gold reserves for economic relief

TASHKENT, Uzbekistan - Uzbekistan is turning to its massive gold reserves to help fight its way out of an economic ...